Surprise, surprise!  I normally do only one leg of the delivery trips but this year Archie called to ask if I could do the final leg from Miami to Tamp Bay since someone else had to cancel.  Not one to decline an opportunity to sail, particularly this leg which would include a stop in sunny Key West in the middle of November, I readily agreed! The crew would be Archie, Larry, and me.

The flight to Miami was uneventful, and we stepped out into 80 degree plus warm humid air, Ahhh I love doing that, and hopped a cab to the downtown marina where BETTY ANN was awaiting. I checked out the boat, including the cold beer storage, while Archie and Larry went provisioning. I should go on that trip to the market some time to see Larry in action. I imagine it to be like a mother shopping with an active child.

“But do we really need 5 pounds for the three of us?”

“Hey Archie, bacon is on sale – four pounds for the price of three!”

“But we are only at sea for four days, wouldn’t one pound do it?”

Anyway, they came back heavily laden with top grade supplies which were stowed away and off we went for dinner in South Beach. With memories of $14 drinks in mind we went one block back from Ocean Drive, and found the Puerto Saqua cuban restaurant on Collins St. that looked interesting (and inexpensive). This was not to be Larry’s favorite place to eat. He ordered a non-alcoholic Becks but got the regular kind, he is still waiting for his lobster long after Archie and I are served, his meal is judged mediocre while ours is delicious. Maybe he said something that unknowingly pissed off the waitress?  It is obviously a very popular place with lines out the door and everyone else seemes to be having a good dinner.

Whatever, we walk back to the boat and turn in.  Good to be back on board!

We depart 0630 at first light and motor out the inlet into an easterly breeze, unfurl the sails and turn towards the south.  We are motor sailing at 8 knots when BETTY ANN decides to spring her surprise on us to see if we are worthy to continue. ( She seems to do this each trip lately (snapped halyard, parted jib outhaul, loose propeller shaft coupling, snapped main reefing line etc)  The engine temperature alarm sounds!  No real problem here, we can maintain our course while sailing and sort this out.  Archie goes below to check the raw water strainer and finds it has a bit of weed in it, but more worrisome is the fact the bottom of the screen has corroded off so it is basically useless, and we wonder what might have passed into the raw water pump or beyond. We decide to cannibalize the screen from the A/C unit since it is basically the same size, just needs to have an indent in the bottom drilled out to fit. This done we refire the engine but find the problem remains. Time for McGiver!   I configure the the valves to use the emergency bilge suction that works off the engine raw water pump. Nice, the alarm goes off so we know the pump is good and the system clear. Next I run the hose we use to shift fresh water between tanks and use it to back flush the intake. When everything is reconnected the problem is gone.

It is a really hot day with pretty good swells and Larry doesn’t fare well trying to work in the galley so breakfast and lunch are light.

We have used up a lot of time poking along while making repairs so the kinder, gentler Captain Archie decides we will be forced  to pull into Key Largo instead of making an night time entry into Marathon. Damn!  As we head in the Largo Canal there is a tight 90 degree bend known locally as Crash Corner.  A blind corner which requires a Sécurité transmission. Archie makes it and another boater answers with  Which crash corner? How many are there? answers Archie.

By 1500 we are docked and Arch and Larry have jumped in the pool. 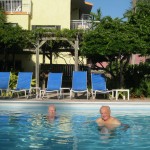 Funny thing about that pool. When I got there for some reason I read the large blue Pool and Spa Rules signs posted nearby; the rules were the same for each. My attention is drawn to Rule # 8 and I wonder what happened, and when, to make that rule necessary.

Swim call is over at 1700, we shower and head for dinner at Sharpies Pub, not more than 100 steps from the boat. The food is good, the beer is cold and there is live entertainment. The  first set is pretty good but the singer has a  female vocalist from N.Y.C. that joins him for the second set and she belts out jazz tunes in a really loud, high voice. Good thing a day at sea makes you very tired because she keeps singing long after we have turned in.

We are off early for Key West and enjoy 12 hours of a beam reach motor sail at 8-9 knots. Larry is back in the galley and serves a huge lunch.  As we approach the marina we are directed to a slip on the western side of the pier where we are met by Diane, the dock mistress. As Archie backs into the slip Diane steps to the very end to receive my bow line and the board gives way beneath her. This is not going to work she shouts, and we are directed to dock alongside the easternmost pier, opposite a spectacular 87 foot custom build Jim Smith Sportfisher named PATSEA. More about that later.

Once secured, and after we spliced the mainbrace (I leave it to you to check the meaning of that salty phrase) we were off the The Schooner Bar.  Too late for Michael McCloud but Greg Walther, a good cover artist was taking requests so of course I asked for some John Prine and he sang Paradise, and Angel from Montgomery – wow – two of my favorites. He also had a really funny original song about a weather channel reporter sent to Key West to cover Irene. There was no wind or storm when he got there so the crew rigged a huge fan on the beach to get the effect.

Back at our slip we met the crew of PATSEA and got some particulars about the boat, but not a tour since the owners were due to arrive shortly for a birthday party. Anyway, power is twin 2400 HP MTU diesels which give a top speed of  45 knots, while burning close to 125 gallons of fuel per hour!

After delicious breakfast waffles at Two Friends patio restaurant we head to the marine hardware store for replacement strainers and a repair parts kit for the broken safety line gate snap hook. (To get the part number, which was written upside down on the strainer I got so far into the compartment under the cabin floor that Larry had to pull me out by grabbing onto my shorts) Once the maintenance is completed it is back to the Schooner Bar for lunch, and a full afternoon of drinks and Michael McCloud music.  He puts on a good show with some new patter between songs, and a new, at least to me song about his dog Cinderella. Lyrics something like

I may not know just how, when or why.

Since my memory faded due to Captain and Coke consumption here is the YouTube link. http://www.youtube.com/watch?v=wi2FvnnDry8

A woman sat down at a table in front of the stage and dropped some bread crumbs for the pigeons. McCloud stops in the middle of his song and explains how hard they work to keep the pigeons away because when one person feeds them they fly over someone else and shit on their head. “So what I am saying mam is don’t feed the fucking pigeons!”

About this time a crowd of people from a cruise ship pour into the bar and one of them is about fifty, overweight wearing cutoffs and a sleeveless t shirt, and adorned with unattractive tattoos over most of her body. Archie leans over and says, “She is someones Grandmother!”  How does he come up with these great one liners?

Back at the dock we notice a manatee had come to drink water from the hose PATSEAS crew were using to wash down the boat after returning from brief fishing excursion. Man, they are really strange creatures -live in the ocean but need fresh water to drink.

The forecast is for high winds to the north so we decide to hold off for a day!

We get to enjoy another day in Key West and put it to good use. The bilge pump has been coming on but can not locate where the water is coming from, all the compartments except the one in the salon were dry, and we assumed that water was a result of opening the strainer the day before. However, after I bailed it out completely the cause is clear. I must have just cracked open the valve for the emergency bilge pump when trying to extricate myself  the day before and water was trickling in.

Larry and I wash down BETTY ANN and decide to get a coat of wax on the port side. The captain of the impeccable, mirror finished PATSEA, who wipes off every drop of dew with  a chamois cloth remarks on what a good job we are doing. I am sure he is thinking he would be fired on the spot if he ever did a job like it.

We head out for a great dinner at Pepe’s and turn in early  – back to sea tomorrow at first light.

I would be delinquent in my reporting if I didn’t mention that, as usual, whenever we have been within cell phone coverage Larry has been involved in several business negotiations. One of the highlights this trip is that a proposal he submitted to the Town Of Charlestown had not been acted on within the required time so was approved by default. (On visits to Town hall he had seen the box sitting under a desk).  So we expect to hear complaints about what I call “Larry’s Loophole” when we return.

0630 and we are underway for Brayeton, the end of the line. We enjoy Northeast wind of 12-15 knots on the beam all day with the same forecast for all night. Bets are made between Larry and Archie regarding arrival time – 0800 and 0900 respectively.  I know the wager between a seasoned business man and  country lawyer who have worked together for years will be debated and justified no mater when we arrive. Was it when we hit the waypoint off Tampa Bay or when we docked at the marina? etc.  But BETTY ANN has her own ideas and we sail and motor sail (to charge the batteries) at 7-9 knots the entire way. At our rate of advance we arrive at our waypoint before sunrise and head into Tampa bay under power at 3 knots. We stop for fuel and arrive at twin Dolphins Marina at 0900.

With time on our hands Larry and I finish the wax job on the starboard side.

We go to the marina restaurant for dinner and the appetizers, cocktails and conversation are so good we forget to order our entrees.  Oh well, a taxi is coming for us way before the sun comes up so time to hit the sack.