The journal for this trip really begins shortly after last year’s fall run to Charleston. Eric Baruzzi (Officer in Charge, USCG Station Point Judith) mentioned he hadn’t seen my journal (still haven’t finished it) and while talking about the trip Eric commented he’d really like to join the crew. I figured it would probably never happen but lo-and-behold June 2nd rolls around and the two of us are on a Southwest flight from RI to Baltimore and then on to Charleston, SC.

Our B 50&51 boarding passes produce two seats in the last row of the plane and the flight is uneventful. On the connecting flight we have slightly better passes and as we walk up the isle I spot a row with an attractive woman in a window seat with the isle and center seats open. “How about here Eric” I say. “Let’s just go to those same seats in the back” says he. As we settle in we realize there are a total of 5 babies/toddlers surrounding us. “Want to go back”? Eric remarks. But the seats have been grabbed so we hope for the best. Turns out not one of those kids cried, screamed, whined, coughed, needed changing or sneezed. Totally amazing.

We make it to the Betty Ann at the far end of the Charleston City Marina  Mega Dock before noon, meet Archie, stow our gear and I take Eric on a tour of the boat.  Salty Mike’s bar is closed so we have lunch at the restaurant above then return to finish preparations for getting underway the next morning. By 3 PM we are ready for liberty in Charleston and, as is our habit, start at The Blind Tiger Pub. After a couple of rounds the rest of the crew arrive (Jim Geib and his daughter Stephanie) and we finish a few more rounds along with some fried green tomatoes, fritters and artichoke dip appetizers, then head off for a quick tour of downtown.

Eric recalls a prior visit, while on liberty from a USCG cutter, and a place where the back wall of the bar was a row of slurpy machines that served up different flavor margaritas. We happen to be right in front of Wet Willies bar, look inside, and that is the place! We did a quick tour of downtown then walked back to the now open Salty Mikes for dinner and drinks.  A group of ‘locals’ provides some good eavesdropping entertainment. One guy is explaining that he can’t brush his teeth in the morning without gagging and the female in the group bursts out with some serious trash talk. All-in-all a good liberty call.

We are underway at 0700  with a full USCG sendoff!! (well I did have this great photo sitting around so why not push the truth a bit) Our destination is Point Judith R.I. and the plan is to go well off shore for a non-stop passage. This will be my third chance to round Cape Hatteras so I am psyched. The forecast is for a hot sunny day with light southerly winds; enough to fill the sails for motor sailing but nothing more. Eric starts an hourly plot of our progress which each subsequent watch faithfully maintains. Larry is not with us this trip, nor has he provisioned us with his frozen rib, chili, chicken and lasagna entrees. So what’s for supper? Archie pops open the freezer (which is struggling to maintain 22 degrees F during the hot day)  and explains he bought a tray of chicken breasts, a bag of shrimp, a pork loin, two Willow Tree Farms chicken pot pies and some frozen mixed vegetables – the kind where you cook the bag in a microwave or pot of water. This is going to be like those cooking shows where the chefs are given a basket of ingredients and challenged to create a meal. I’m thinking Chinese chicken and vegetables on rice but there is no soy sauce. End up making a Thai type of sauce with milk, peanut butter, coconut rum and hot peppers.

Another hot day like yesterday with variable southerly winds. Jim G. tweaks the sail trim and we maintain about an 8 knot motor sail. Archie has acquired an asymmetrical jib and we’re all dying to try it but given the forecast we’ll be using the iron jenny instead.  We dine on Archie’s sandwiches for lunch and then Eric and I break out fishing gear. There are only two lures in the tackle box so we put the small Kastmaster on the spinning rod and a tuna squid lure on the larger bait casting rod. Amid a bit of heckling we settle down behind the cockpit. Music from Eric’s phone, and even a cold beer, complete the setting.  An hour or so goes by with no fish so we switch rods to change our luck but the fish are not cooperating and the heckling intensifies a bit. Eventually we reel in the spinning rig and secure the other rod to the inflatable. 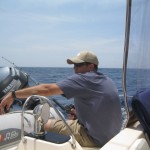 I take the helm and while Jim and Stephanie are enjoying a dolphin show at the bow I spot a weather “super buoy” charted several miles ahead on the chart plotter. Hmmmm, a good spot for Mahi Mahi, so I alter course three degrees to port and after a bit tell Eric to man the rod. We take the buoy close aboard and after we pass Eric calls out “fish on”. I slow the boat while Eric fights the fish.

Even the doubters are on board now – they are even suggesting ways to cook it. But it is not to be. Eric gets it to within 50′ of the boat, it is a good sized Mahi, but it surfs down the 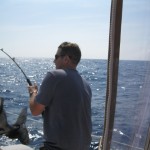 face of the large following swell, spits out the hook and disappears.  We try again at a large abandoned light tower off Hatteras. It is an imposing structure and Archie, who is at the helm, maintains separation and I come up empty so frozen shrimp replaces fresh fish on the dinner menu. But on the bright side I have now made it around the Cape. We should have implemented some sort of recognition ritual – a minor version of King Neptune’s Court for those that cross the equator.

As dawn beaks it is apparent the NOAA’s predicted west wind  has not materialized and we continue to motor sail along our 038 M track with the same following  breeze at 7-8 knots.  A front was forecast to pass our area but we are now so far offshore the VHF weather stations are quiet. Out comes the users manual for the single side band radio.  Hmmmm – complicated stuff – multiple daytime and night time frequencies to choose from, weather only broadcast at certain times (like the system we experienced sailing off the coast of France). Lots of squealing/howling type sounds but nothing useful.

Late in the afternoon I suggest we kill the engine for at least a bit of sailing and for one hour we do glide along quietly enjoying nature’s free power. But then the front comes through. Wind goes calm, fire up the engine, reef the main, wind and seas pick up, oops – Jim and Eric deal with a parted mainsail outhaul.

Then a truly insane experience cooking dinner. I’d planned pan seared pork loin with peach salsa and mashed potatoes and managed to pull it off. But while rocking and rolling, slipping and sliding in the galley with a pot of boiling potatoes and a sizzling frying pan next to me as I’m dicing peaches and vegetables I was thinking P&J sandwiches would have been a wiser menu. Stephanie wasn’t feeling up to a full meal but chowed down on some mashed potatoes. Jim also passed so there was more than plenty for Archie, Eric and me.

The rest of the night was reminiscent of a Twilight Zone episode. When I came on watch at 0200 Eric asked me to check his last two hourly plots. I plotted the two GPS fixes on the chart and came up with near identical positions as his. “Then we have a problem” says Eric, “we’re heading straight toward Jones Beach”.  The chart plotter showed our heading parallel to the coast,  compass course was fine and we were well offshore so we weren’t concerned, just very puzzled. Throw in a couple of 180 degree wind shifts and a missing sea buoy and the hairs started rising on the back of our necks. We agrees we were too fatigued to figure out the plots so put that off to tomorrow.

My favorite way to wake up – “Anyone want egg sandwiches”? asks Stephanie.  And she delivers some excellent ones on grilled English muffins. Eric and I return to the plotting question and conclude since the only chart we could use that far offshore was the small scale chart covering Cape May to Cape Cod, our plots had been skewed.

It is obvious to all that the weather has kept us from making a hoped for stop at Block Island so we settle down motor sailing in a pleasant Northwest breeze and plan for a late arrival at Point Judith. Stephanie has had enough for one trip and makes arrangements for a pickup when we tie up. The rest of the crew celebrates another successful trip with beer, rum and whatever else is found in the Captains liquor locker. 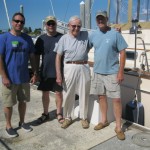