We leave the slip at Belle Viu Marina, in Wakefield, RI bound for Charleston, S.C,. Most likely we will pull into Chesapeake Bay for the inland route around Cape Hatteras, but if Neptune were to grant my wish for favorable wind and seas – unlikely given the forecast – we will round the Cape on the outside, something I have yet to do.

It is a cold, gray morning with an unfavorable wind and the predictions are it will go down hill from here. Joe Hitchery has “signed on” again as has Ray Xavier. Both have done a northbound leg from Tampa to Charleston. Larry and I round out Archie’s crew. 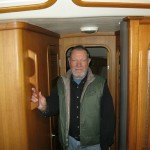 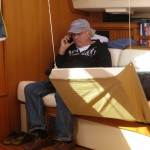 Larry
We head out past Montauk Point and down the south shore of Long Island for the 50 hour passage and by the time we finish dinner (the first of Larry’s masterpieces) we encounter rain, increasing west/southwesterly winds and building seas. It continues to slowly build and by the time we are furthest off passing NYC and Delaware Bay we are in 5-7′ beam seas. Larry gets thrown from his windward bunk and covered with an avalanche of books from the shelf. Ray spends most of the night in the navigation station swivel chair but gets little sleep between our 4 on – 6 off watch schedule. As for me, comfortably settled in my sleeping bag on the leeward settee it is sweet dreams. To plagiarize a comment Ray made later – “It was cold, windy and rough all night but there is nowhere else I would rather be.” 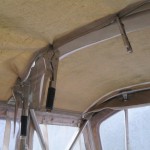 Friday morning’s offshore forecast for Hatteras is no better so in we go, up the Elizabeth River, past Norfolk, through the Great Bridge lock and settle in at a rear dock at Atlantic Boat Yard. These are the docks behind the marina, up a short canal where boats are stored in large sheds with metal roofs. No shore power and not much in the way of conveniences but it is quiet and the boat is not rolling. The shower facilities don’t get much in the way of reviews so I shower aboard – no sense wasting all the hot water the engine has been generating.

After a round of beers, and a couple of rums, we grab a ride to a new restaurant with the bartender they sent for us. She is a hot ticket, and gives us her suggested favorites on the way. The place is called the Court House Restaurant and the menu is formatted as a Subpoena – much to the delight of our two lawyers Archie and Joe – and also to Larry who it seems has been on the receiving end of perhaps one or two

Anyway, the food (I had fried oysters, prime rib with beans and greens) was outstanding. When our waitress Channa “You can call me Donna” asked if she could get us anything else I said “Sure, the recipe for those greens”. Five minutes later there it was nicely written out on a scrap piece of paper. So – well fed and happy we were driven back to the boat for a nightcap and a long, uninterrupted sleep – well except for Ray who can’t seem to get settled.

I wake up early and go on deck with my camera. The sun is just about to rise and there is fog rolling up the canal and I anticipate getting a picture Andrew will covet. As I walk to the bow I suddenly find my feet zipping out from under me. WTF?? there is ice on deck!  The old adage “one hand for you  and one for the boat”  served me well and I swing back up using my grip on the stay.   But I grabbed the shot, and several others in the ground fog as we make our way down the ICW passing some rowing teams out for practice. 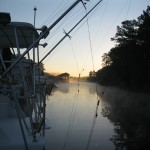 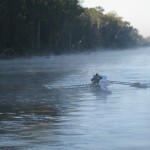 Referring now to my 2 year old notes it appears Joe’s Lone Ranger joke was the only excitement of the day. I don’t recall the complete telling of it but remember the Lone Ranger and Tonto make camp and Tonto wakes him up in the middle of the night and asks the meaning of what he sees. The Ranger waxes eloquently about the multitude of stars and infinite space to which Tonto replies “No dumbass, someone steal our tent”.  The other excitement is that the chart plotter decided to take the day off.

My notes are really sketchy now but I assume we made it to Coinjock, N.C. The following morning we depart and take the route around Roanoke Island comforted by the information I obtained from the Oregon Inlet Coast Guard Station that the channel had not silted in. Larry provided additional narrative on channel depths that he miraculously obtained from Google Earth images on his I-pad.  We anchored in Adams Creek at 0200 with a full moon rising while we dined on Larry’s Chile and a rum chaser (for me). 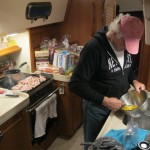 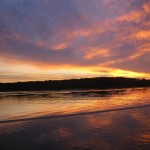 Larry makes breakfast while the sun rises over Adams Creek

We awake to a wonderful sunrise, and make our way to the Moorehead City. I text Andrew and find out he’s leaving for work in Austin, TX as we we  head out the inlet to sea.

NOTE: anyone who wants to complete this log is welcome to since I have no notes on the offshore trip to Charleston.